The Death of Klinghoffer at the Met, 2

As we wrote in conclusion of our last post, opera fans all over the world who had looked forward to forming their own opinion of the much debated The Death of Klinghoffer, were disappointed last June when the title was dropped from the “Live in HD” schedule. Some time prior to the June cancellation, Peter Gelb had declared, “Although there has been a campaign against Klinghoffer at the Met, we will not allow this opera to be suppressed, since it is neither anti-Semitic, nor a glorification of terrorism” (The Metropolitan Opera 14-15 Season Book). (For two frequently cited opposing positions on this question central to the opera’s reception, click on Robert Fink and
Richard Taruskin.) Gelb was evidently persuaded to change his mind by the Klinghoffer daughters, the Anti-Defamation League, and “three or four” major donors (Times). His reversal may have been due in part to the victories of parties on the right, some blatantly anti-Semitic, in the European parliamentary elections: “I’m convinced that the opera is not anti-Semitic but I’ve also become convinced that there is genuine concern in the international Jewish community that the live transmission of The Death of Klinghoffer would be inappropriate at this time of rising anti-Semitism, particularly in Europe.” (Times)


This blog promises to tie the present to the past. And in that spirit, we evoke here the truncation of the run of Richard Strauss’s Salome after its Met premiere on January 22 1907 and suggest that it serves as an object lesson for the withdrawal of the TV and radio simulcasts of The Death of Klinghoffer. The Salome affair is not the only other instance of the company’s self-censorship; it is the one that aligns itself most closely with the action taken last June, as you will note as you read on.

The account that follows is drawn from our recent publication, Grand Opera: The Story of the Met.

In late summer 1906, general manager Heinrich Conried let it be known that in the coming season the Met would be the first company to stage a Strauss opera in the United States, and that that opera would be Salome. His negotiations with Strauss concluded with an agreement for ten shows at what Conried protested were unheard-of, “ridiculously high” fees.  That October, the general manager announced the first performance, at double the usual prices, of the one-act opera based on Oscar Wilde’s 1894 notorious French play. The opera had, “for more than a year, been the storm center of the musical world.”  Conried himself had qualms about the work’s New York reception. He wrote to Strauss, “I . . . don’t know how the American people will take to the subject, and I have simply said that, even at the risk of my audiences  not liking  the  material, I, as Director of the Metropolitan Opera House, would be bound to produce your opera before my audiences—an opera which I, personally, and unendingly, admire.” 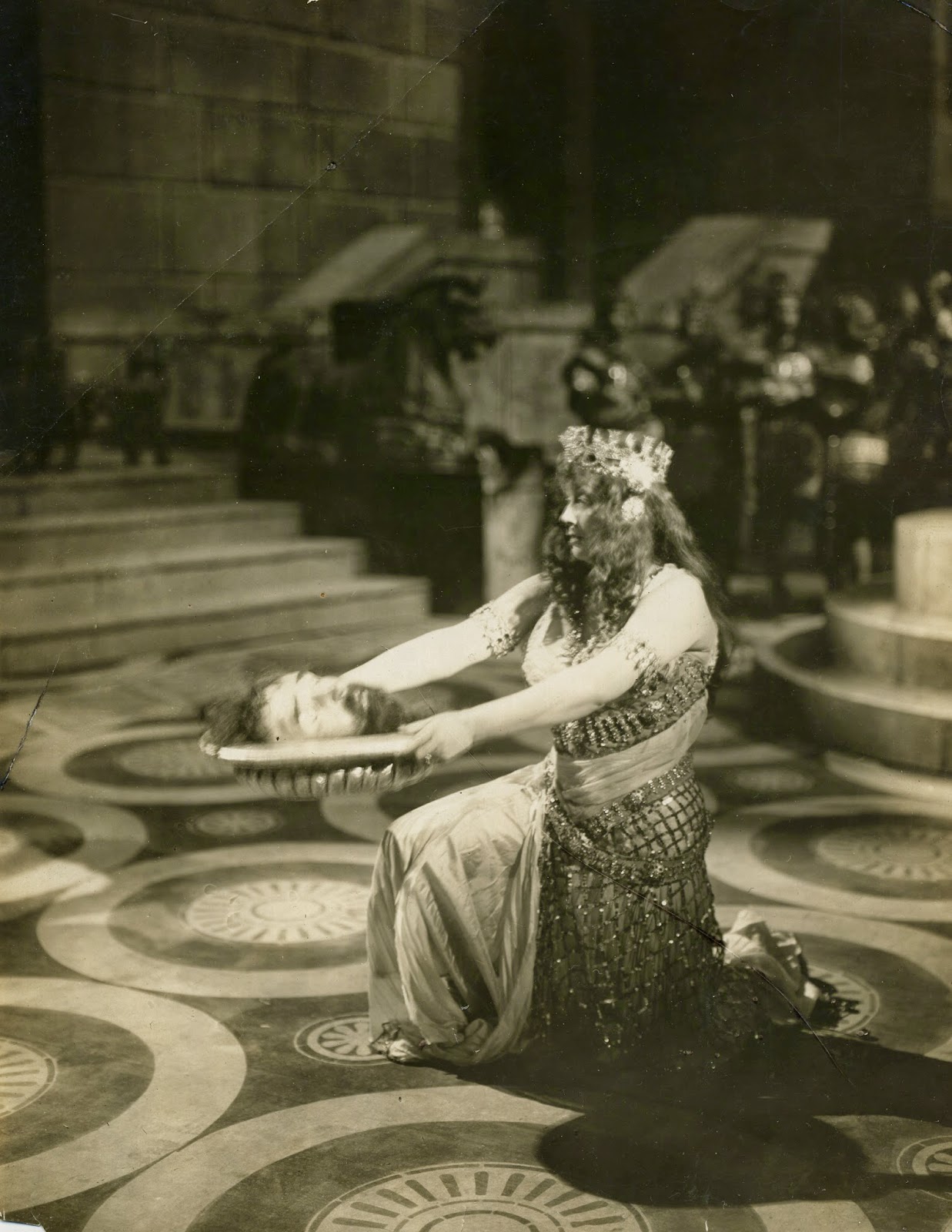 Fremstad, a Swedish-American dramatic soprano, searingly intense as Isolde and Kundry, could be frightening in her dedication to her art.  Her studies for Salome had included a much-publicized trip to the city morgue to gauge the weight of a human head, grossly undervalued by the prop she was to fondle. Most chronicles record that the audience drew back in revulsion when Fremstad “kisse[d] the bloody lips and presse[d] her teeth into the gelid flesh” of the severed head.

While Conried had had misgivings about the reaction of his audience, he had failed to reckon with the puritanical sensibilities of his patrons.  Not only did the Metropolitan directors weigh in, they weighed in quickly and decisively. Three days after the premiere, they effectively demanded that Conried cancel the remaining performances. Led by J. P. Morgan, the most powerful member of the board, they declared that “the directors of the Metropolitan Opera and Real Estate Company consider that the performance of Salome is objectionable and detrimental to the best interests of the Metropolitan Opera House. They therefore protest against any repetition of this opera.” 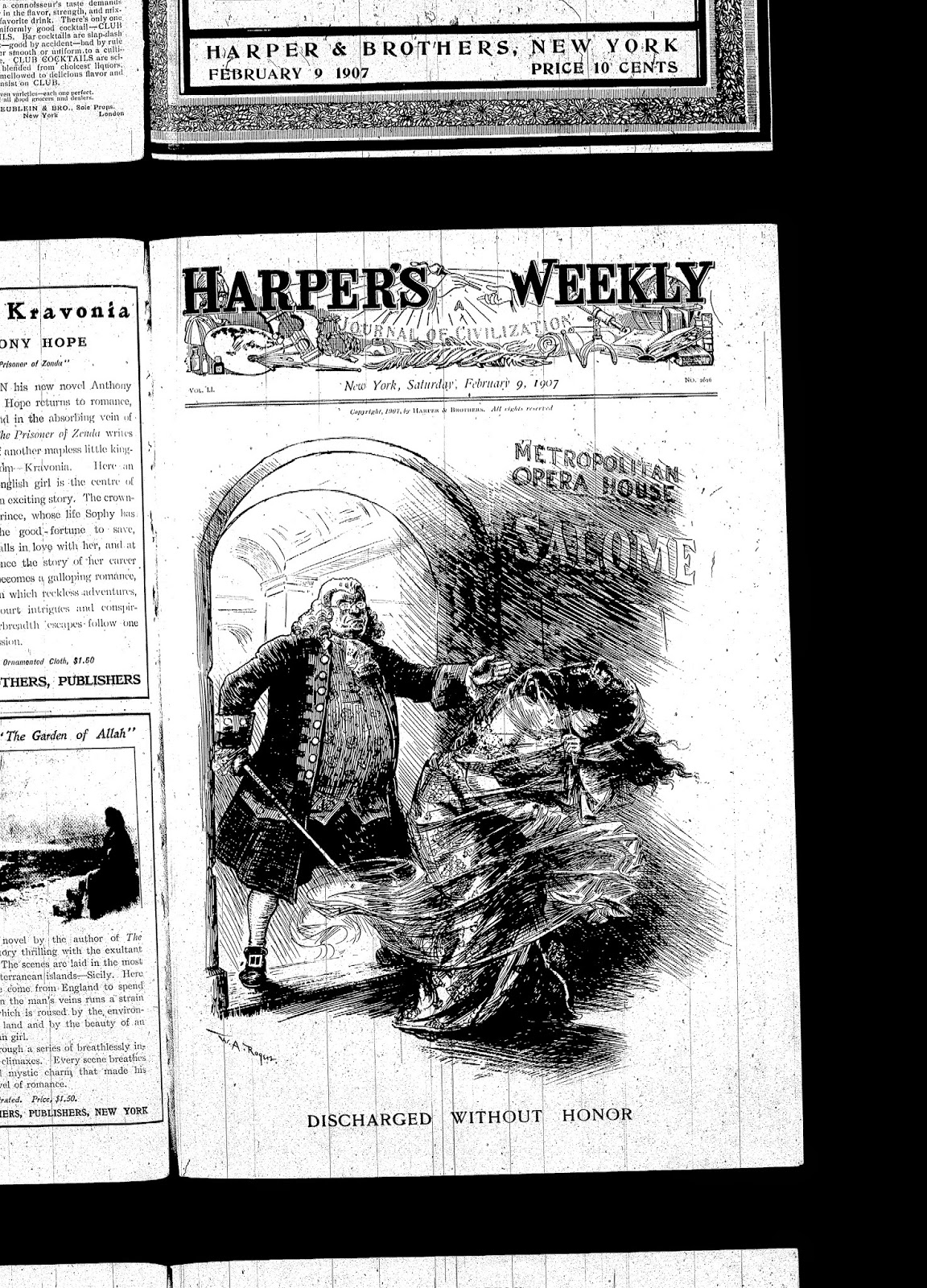 The directors were unanimous in their condemnation; one threatened more than termination of contract: “I understand that if Mr. Conried attempts to put the opera on in spite of the objections which have been made the board is quite likely to use force to prevent his doing so” (Times).  A number of pastors jumped in with both feet during their Sunday sermons. The Tribune cited Methodist Episcopal Rev. Dr. Charles Edward Locke’s conclusion that “such productions were responsible for such tragedies as the Stanford White case,” a reference to Harry Thaw’s murder of White in 1906 over the noted architect’s affair with Thaw’s wife, Evelyn Nesbitt.

The “protest” of the board of directors of the Metropolitan Opera and Real Estate Company was, in fact, an interdiction that Conried attempted in vain to have overturned. In 1922, the great Met patron Otto Kahn tried again to convince the Metropolitan owners to allow the staging of the opera, a specialty of the new diva, Maria Jeritza, “an artist of the highest attainments and of dignity and refinement.”  He went on to assure the Metropolitan directors in the most ingratiating terms that he would “be unwilling to sanction any performance which could give just offence to the moral or religious sentiments of the community.” Kahn was again rebuffed. It was not until 1934, twenty-seven years after her stand-in ballerina had shed the seventh veil, that Fremstad, seated in the audience, could witness the famous dance, at last repeated at the Met.

The Death of Klinghoffer may well return to the Met in the coming years. But when will it be broadcast to the global audience on the radio and “Live in HD”?


Posted by Charles Affron, Mirella Jona Affron at 9:53 AM