This past January, noted Russian mezzo-soprano Elena Obraztsova died in Leipzig at the age of 75.
Obraztsova made her debut as Marina in Boris Godunov at Moscow’s Bolshoi Opera in 1963. Her international career took flight with the Bolshoi’s tours to Milan and Montreal, and then to New York and Washington in the triumphant summer of 1975. It was then that American audiences experienced the revelation of Soviet artists native to the culture singing Mussorgsky, Tchaikovsky, and Prokofiev in the original language. Among those who made the strongest effect were bass Evgeny Nesterenko, tenor Vladimir Atlantov, baritone Yuri Mazurok, soprano Makvala Kasrashvili, and Elena Obraztsova. It would be Obraztsova who would rack up the greatest number of Met performances, thirty from October 1976 to April 1979, a brief period of détente that allowed artists from the U.S.S.R. to appear with American companies. This hiatus in the Cold War came to an end in 1980 when Washington suspended talks with Moscow on cultural exchanges as one response to the Soviet invasion of Afghanistan. Obraztsova continued her international career on the opera stages of Europe and South America. She was one of very few Soviet singers who were granted permission to return to the Met in the 1980s until perestroika opened the doors to so many wonderful artists from Eastern Europe. The privilege of travel she enjoyed has been ascribed to her willingness to cooperate with the then Communist regime.

During her early seasons at the Met, Obraztsova sang the principal dramatic mezzo roles of the Italian and French repertoire—Amneris, Eboli, Azucena, Carmen, Dalila. Only in her last performances with the company, in 2001 and 2002, when she took on character parts in Prokofiev’s The Gambler and War and Peace, did she sing in Russian. Met audiences were therefore deprived of the great Russian roles in which she excelled, Marina and Marfa, though the company staged both Boris Godunov and Khovanshchina in the 1970s and 1980s.
We interviewed the diva in June 2001 at the Barcelona home of Gloria Vilardell, her agent for Spain. We asked her why she had not sung Marina and Marfa with the Met. “I don’t know. I sing Boris in the Rimsky-Korsakov version. Now, everyone does the Shostakovich version, which I don’t like. Do you know why I am angry about this new fashion? . . . When Rimsky orchestrated Mussorgsky’s music, he knew what he was doing. The two of them shared a room. Who knew better—Rimsky or Shostakovich?”

As the clip that follows makes palpable, Russian music and text shows off Obraztsova’s rock-solid, fully resonant, opulent lower register. Here she is as Marina, a Polish noblewoman, blandishing her most voluptuous tones as she declares her love to the false Dimitri, the pretender who has pledged to usurp the throne of Russia’s Czar, Boris. The tenor is A. Tolstoukhov.

In Khovanshchina, the incantatory Act II aria of the religious fanatic Marfa predicts the fall of the progressive Prince Golitsin. The depth of Obraztsova’s organ-like timbre matches the gravity of the mystic’s divination. This is an excerpt from a 1980 Tokyo concert.

Obraztsova’s Carmen was celebrated everywhere. The Vienna State Opera mounted a prestigious new production for her in 1978, staged by Franco Zeffirelli, conducted by Carlos Kleiber. Here we see her in Act I. Carefree, playfully seductive, spins the elegant line of the “Habanera” with its wonted lightness and grace.

Posted by Charles Affron, Mirella Jona Affron at 8:12 AM No comments:

Note to those who receive new posts via e-mail: You must click on the title of the nclipew post, highlighted above in blue, in order to access images and sound.

The last of the six new productions of the Met’s 2014-15 season, Cavalleria rusticana and Pagliacci, opened on April 14,  2015. In general, critical response to these recent investitures has weighed heavily on the side of disappointment. Not one of the lately unveiled stagings can be said to have enjoyed the enthusiastic consensus of reviewers. Briefly then: The reception of The Death of Klinghoffer was mostly positive, that of Le Nozze di Figaro, cool at best. The notices of Iolanta/Bluebeard’s Castle were mixed; those of The Merry Widow and La Donna del lago, negative; and those of Cavalleria and Pagliacci, primarily so. And only Mozart’s treasured comedy and the Mascagni/Leocavallo hugely popular double bill were reinvestitures of core repertoire favorites that often find themselves subjected to particular scrutiny, especially when they propose significant rereadings of the work.

In our previous post, we tracked the controversy over departures from conventional settings of the core all the way back to the 1951 Pagliacci. We argued that the heated operatic debate of the present day had its origins in the reception of a last-minute addition to Rudolf Bing’s inaugural season.
Not surprisingly, given that the April productions are new, staging was front and center in the reviews of Cav/Pag. And since the productions they replaced were signed by Franco Zeffirelli, the comparison with the Zeffirelli aesthetic, beloved by many of the public and detested by almost all critics, would inevitably come to the fore. “In the beginning, say 1970, there was Franco Zeffirelli. He turned Cavalleria rusticana and Pagliacci, the eternal verist twins, into a pair of kitsch spectaculars. Audiences applauded the scenery” (Financial Times, April 15, 2015).

And now so too are Cavalleria and Pagliacci. Zeffirelli deployed much of the action of Cavalleria on a monumental church stairway that filled half the stage; realistic housefronts with balconies and views of the hill town framed this meticulous slice-of-life rendering of a bright, colorful Easter Sunday in Sicily. 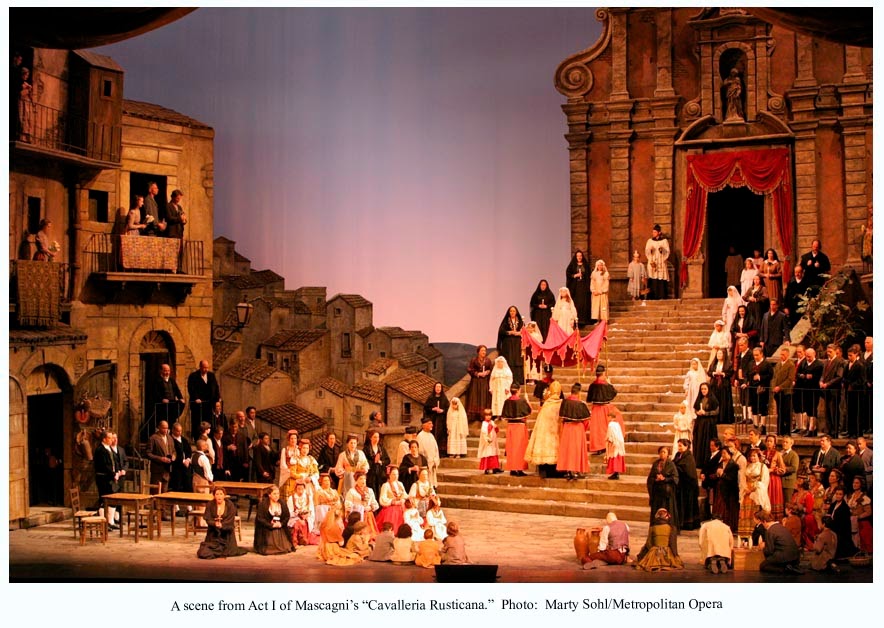 Eschewing the slightest hint of the picturesque that floods the Zeffirelli version, even in the religious procession, the David McVicar/Rae Smith production drains the stage of the specificity of the quotidian, of color and light. 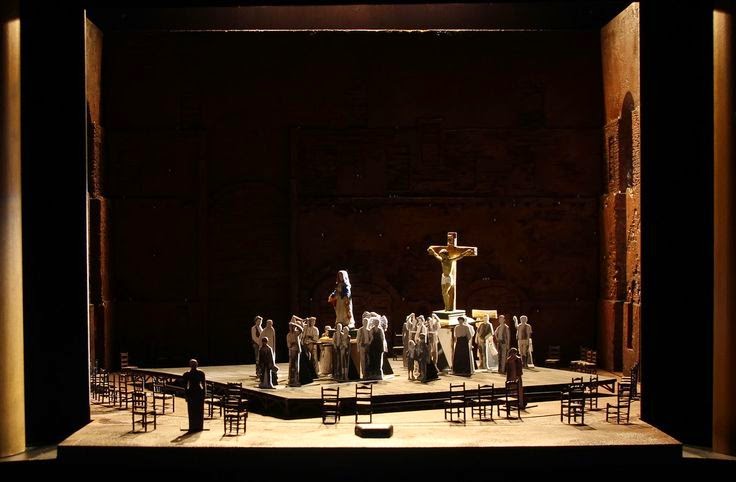 Cavalleria rusticana (model), Metropolitan Opera, 2015
Displacement here is not of place or date--the action transpires as is prescribed in a Sicilian village circa 1880--but of time. The artistic team turns day into night (some have observed that the darkness signals not mass on Easter morn, but midnight mass). A revolving platform repositions again and again a patriarchal community of subjugated women and swaggering, predatory men, the better to give  relief to the drama of individual betrayal. Santuzza, victim and ultimately avenger, is repeatedly set apart from the black-clad villagers whose codes she has broken.
Many of those glad to bid farewell to Zeffirelli’s obsessive pictorialism, including reviewers who missed few opportunities to put him down, were disappointed by its replacement, spare or not. The Times was irritated by the over-active platform, the New Yorker found the staging “relentlessly grim,” the Observer thought that it “bombed on just about every level.” Only the Wall Street Journal gave a thumbs up. With caveats about the lighting and the male dancers who mimed Alfio’s horses, we thought the show compelling in its abstraction, particularly as it transformed the lengthy genre scenes of village life into comments on the opera’s social/sexual politics.

For Pagliacci, McVicar and Smith moved the action forward from 1865 to 1950 and from Calabria to Sicily. We are alerted that the two operas take place in the same southern Italian town square by the imposing stone walls that enclose both narratives. There, the unity ends.

As it happened, the square, neon lights, and stalled truck of the McVicar/Smith Pagliacci turned out to be more naturalistic than Zeffirelli’s rocky outcroppings, stunted tree, and big sky. 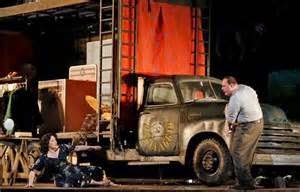 The new version added a three-man vaudeville team. The intervention of the trio into the prologue (one of several inventions) violated the expository, deeply human and complex import of the baritone’s aria. While the press, in general, was amused by the antics, for us the slapstick of the play-within-a-play went too far in making the critical contrast between farce and melodrama. For this post, we have chosen two clips that demonstrate the power of music and text when the performer rather than the production is the primary site of meaning.

Lawrence Tibbett sings “Si può?” (If I may)” in this scene from Metropolitan (1935), the fifth of six feature films he made between 1930 and 1937. Tibbett, who had a successful career in Hollywood simultaneously with his Met stardom, is captured here at his extraordinary prime, reaching out to the audience with gestures as subtly inflected as his phrasing and the colors of his voice. The charisma of the singer and the purpose of the character are perfectly joined.

Giovanni Martinelli sings “Vesti la giubba” in this 1926 Vitaphone short. The aria is forever associated with Enrico Caruso, the tenor who holds the Met record for performances of Pagliacci. Martinelli became the company’s Canio after Caruso’s premature death. As you will hear, he favors an unusually slow tempo. Sustaining astonishing tension with astonishing vocal energy, the tenor gives the tragic density of the short piece its full due.