In just a few days, a century will have separated this season’s revival of Il Trittico from the evening of December 14, 1918 when the Metropolitan Opera thrilled to stage the world premiere of Puccini’s triptych, Il Tabarro, Suor Angelica, and Gianni Schicchi. The lionized Puccini, the most celebrated opera composer of the time, was not in the theatre in 1918 as he had been in 1907 for the Met premieres of Manon Lescaut and Madama Butterfly and in 1910 for the world premiere of La Fanciulla del West. His new three one-act operas were scheduled to be staged a little more than a month after the Great War Armistice of November 11. Trans-Atlantic travel remained risky; Puccini thought it prudent to stay home.
The enthusiasm that preceded the gala event was short-lived when faced with the public and critical reception of two of the short works.  Il Tabarro, Puccini’s slice of proletarian life, his sole foray into the heart of verismo (see our post “What Is Verismo?”), was attacked for its squalid realism, for the paucity of lyric passages, and for the perceived monotony of the river motif that meanders through the score. Il Tabarro was heard for two seasons and then not again at the Met until the mid-1940’s. Suor Angelica was scorned as “over an hour of almost unrelieved female chatter”--despite  Geraldine Farrar’s moving portrayal of the heartbroken nun, torn from her illegitimate child and ultimately driven to suicide. She and her Sisters were banished from the Met stage for fifty-seven years. Gianni Schicchi, a hilarious demonstration of the composer’s farcical vein, cornered all the praise and was immediately welcomed into the company’s repertoire. It was paired with Leoncavallo’s Pagliacci and Montemezzi’s L’Amore dei tre re, and more startlingly with Strauss’s Elektra and Salome and Bartok’s Bluebeard’s Castle.

Puccini’s conception of Il Trittico as a unity, shattered at the Met after only two seasons, prevailed at last in 1975, and the three panels have not been parted since.* The composer himself was after opposition and sought the heightened charge resulting from the narrative and musical contrasts that define the trio. Critics have proposed structural and thematic keys to the “wholeness” of the triptych. Our own reading is a gloss on Puccini’s notion of contrast. In Il Trittico we have what amounts to a clash of genres: Il Tabarro, a melodrama, comes up against the tragedy of Suor Angelica which, in turn, is reversed by the comedy of Gianni Schicchi. 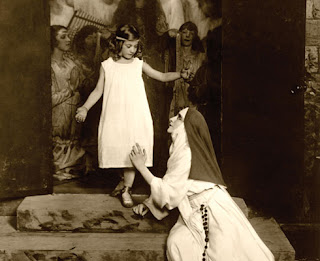 Claudia Muzio and Giulio Crimi as Giorgetta and Luigi

The depiction of the misery and hopelessness of indigent barge workers on the Seine in Il Tabarro is punctuated by brief outbursts of rage and passion from the lovers, Luigi and Giorgetta. But the only true aria falls to the master of the barge, sung just before the opera’s melodramatic climax. Michele’s “Nulla, silenzio (Nothing, silence)” elevates the character to grandeur, so graphically portrayed by baritone Tito Gobbi. The aria traces the devastation felt by Michele through three stages—conjecture as to who is, in fact, the lover of his wife, Giorgetta, the imaginary capture and murder of his rival, and finally, the descent of the two men into the depths of the river, to the death that brings peace.

The most extended (thirteen minutes) confrontation in Il Trittico occurs at the center of Suor Angelica. Banished to the convent for bearing an illegitimate child, the unhappy nun has not heard from her family for seven years. Her aunt, the Zia Principessa, comes to secure her signature on a legal document. Angelica, desperate for news of her little boy, turns on her merciless tormentor. In this clip, Patricia Racette is Angelica, Ewa Podles the Zia Principessa. Contralto Podles unleashes the immense power of her`voice in this rendering of the implacable woman.

Upon learning of the death of her son, Angelica pours out her grief in “Senza mamma, o bimbo (Without your mother, o child).” Here is the wrenching Ermolena Jaho.

Gianni Schicchi, an ensemble piece, boasts the most familiar aria of Il Trittico. Lauretta’s “O mio babbino caro (O, my beloved daddy)” has been, from the first night, beloved by audiences. We are here privy to the silvery timbre and early unaffected manner of Elisabeth Schwarzkopf in a recording conducted by Herbert von Karajan.

The very original tenor aria, ”Firenze è come un albero fiorito (Florence is a flowering tree)” evokes Florence through its monuments, its florescence of arts and letters, and the vigor of the city’s newcomers, “la gente nova,” disdained by the old families. Rinuccio persuades his snobbish relatives to ask for the help of the clever Gianni Schicchi, the father of his beloved Lauretta. Vittorio Grigolo conveys the energy of the youth, and easily scales the heights of the tessitura.

·       * The one exception: Il Tabarro occupied the bill with Pagliacci for an opening night gala in 1994. Domingo was the Luigi, Pavarotti the Canio, and Teresa Stratas did double duty as Giorgetta and Nedda.