Note to those who receive new posts via e-mail: You must click on the title of the new post, highlighted above in blue, in order to access moving images and sound.

The year was 1903, the inaugural season of the Met’s new general manager. And the flamboyant Heinrich Conried was dead set on making a splash. What better way than to issue an extraordinary prospectus announcing the company premiere of Richard Wagner’s Parsifal (1882)?  And what would set off a bigger firestorm than a Christmas eve opening?  Cries of foul and shame emanated from musical, legal,and religious quarters on both sides of the Atlantic, originating at Wahnfried, the home of Cosima, Wagner’s widow, and finally descending on New York. Cosima’s imprecations, befitting her vocation as keeper of the flame, were fueled by the contention that the Metropolitan’s proposed staging was an outrageous violation of copyright law. Her attorneys went to work, arguing that the Met should be enjoined from producing the opera. The moral argument went like this: that playing Wagner’s Bühnenfestspiel (stage-consecrating festival drama) on an ordinary operatic platform was an act of heresy.

The New York Protestant establishment took the attack further, charging that the work itself was sacrilegious. From influential pulpits clergy held that the flower maidens were nothing other than a “red light legion,” the representation of the “Lord’s Supper” an “amusement for the sake of gain.” 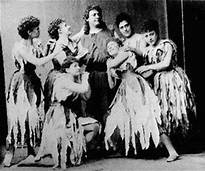 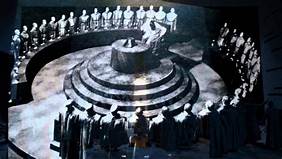 The Parsifal case was ultimately dismissed on this simple legal finding: that the copyright did not extend to the United States. By the time the judge rendered his decision, preparations for Parsifal were well along. Most astounding had been the advance ticket sales, reputedly the greatest ever seen in New York. Weeks before the opening, the American Journal reported melodramatically, “Women Faint amid Crush for Seats to Parsifal. Many of Them Took Places in Line before Daylight and Were Too Weak to Reach the Window When It Was Opened.” Mail orders flooded in so thick and fast that their processing required a room of its own. Against odds of all sorts, Conried had brought off an operatic coup as memorable as any in the Metropolitan annals.

The premiere began at the unlikely hour of five o’clock. The doors were shut at the start of the prelude and, exceptionally, no one arrived late. A hush was reported to envelop the auditorium at the end of the almost two-hour-long act 1, in imitation of Bayreuth’s reverent response to the consecration of the Holy Grail, a practice that persisted at the Met well into the twentieth century.

Many returned in evening clothes for the second act, the flower maidens, Kundry’s attempted seduction of Parsifal, the spear arrested in midair, and the collapse of the castle of Klingsor, the reprobate knight. The audience erupted into a seven-minute ovation at the dramatic climax of Act 2. Similar receptions have greeted productions of Parsifal since. Here, for example, in a clip from a 1993 Berlin performance, is the overwhelming Kundry of Waltraud Meier, with Poul Elming.

Act 3 reverts to the ceremonial timelessness of the opening act. Here are the final minutes of the sublime “Good Friday” scene in which Parsifal, returning from his years of wandering, no longer “the guileless fool,” is baptized by Gurnemanz. The passage is drawn from a 2015 Berlin performance conducted by Daniel Barenboim. Gurnemanz is sung by bass René Pape, the present lead interpreter of the roleParsifal is Wolfgang Koch, Kundry is Anja Kampe.

The opera ends as Parsifal, the redeemer, armed with the spear that pierced Jesus on Calvary, releases Amfortas from his suffering, takes up the Holy Grail. and blesses the brotherhood of knights. In this clip from the 1981 Bayreuth Festival, conducted by Horst Stein, Siegfried Jerusalem is equal to the transcendent lyric and heroic utterances of Parsifal, the new King of the Grail.


Note: We provide a full account of the Met’s 1903 Parsifal in our book, Grand Opera: The Story of the Met. On February 17, 2018, this season’s Met Parsifal can be heard both streaming and on the radio.