In the years surrounding the advent of the twentieth century, when staging/direction became a hot topic in operatic debates, Tosca became the hottest item, at least at the Met, in the raucous tug-of-war between the traditionalists, at one extreme, and the devotees of European Regietheater, at the other. And when Peter Gelb kept his early promise to drive Franco Zeffirelli’s beloved dinosaur into extinction, the tug-of-war devolved into a pitched battle. Zeffirelli’s Tosca, newborn in 1985 and still kicking in 2006, was supplanted in 2009 by Swiss Luc Bondy’s severe riposte to his predecessor’s opulent decors and astounding scenic gestures. Bondy’s parry was drowned in boos that reverberated in furious notices. The noisy reception of those seated in the orchestra and the galleries, and even on Lincoln Center Plaza staring at the giant screen, could not be ignored. The audience was quick to exercise the prerogative of booing that is the signature privilege of operagoing (see our article, “Boo Who?” in the New York Times, September 26, 2009).

The Tosca pendulum has swung once again. This year’s new production, directed by David McVicar (it can be seen “Live in HD” on January 27, 2018), returns to a conventional evocation of Roman sites and to the conventional gestures of the well-worn melodrama. Principal among the familiar trappings is, arguably, the knife with which Floria Tosca stabs Baron Scarpia to death, a moment fans await with anticipation at every performance. When and how will the soprano eye and wield her weapon?

No Tosca is better remembered at this riveting juncture than Maria Callas who, on November 25, 1956, performed the murderous act before an extraordinary public. Millions of spectators were witness to her gesture when she appeared live on U.S. network television. The Callas Tosca was so newsworthy that Ed Sullivan, host of the most popular variety show, allotted a full sixteen minutes to the Greek-American singer and Canadian baritone George London for the Act II duel-to-the-death of the antagonists. The video clip below preserves the crackling encounter of these two singing-actors, as compelling today as it was more than a half-century ago. Tosca has agreed to the police chief’s proposal to free her lover in exchange for sexual favors. To steady her nerves, she drinks a glass of wine; her hand grazes a knife; she understands what she must do; she hesitates, then plants the weapon in his heart. Callas is in her most incisive voice as Tosca hurls her fury at the dying Scarpia.

Eight years after the Ed Sullivan segment, in 1964, near the end of her operatic career, Callas sang Tosca in a Zeffirelli production mounted for her at London’s Royal Opera. Her baritone was longtime colleague Tito Gobbi. Here, again, are the final moments of the Tosca-Scarpia clash. The lascivious Scarpia, writing the deceptive safe-conduct pass for Tosca and her lover, eroticizes his quill pen. Callas has further refined her resolve to attack her nemesis. She sees the knife, stares fixedly at the blade, and at the last moment, she turns to deliver the fatal blow.

The power of these familiar bits of stagecraft, executed with so much conviction and originality by Callas, George London, and Gobbi, put to shame Luc Bondy’s directorial eccentricities: Scarpia kissing a statue of the Virgin on the mouth in Act I; three prostitutes ministering to Scarpia’s pleasures in Act II; Tosca remaining onstage at the end of Act II rather than making her stunning exit, in tandem with Puccini’s musical cues.

Due in large measure to the widely publicized feud between world-class divas Callas and Renata Tebaldi, opera in general and Tosca in particular enjoyed a high media profile in the late 1950s. The title role figured prominently in the repertoires of both stars. Tebaldi, costumed as Tosca, made the cover of Time (November 3, 1958) in celebration of her Met opening night in the Puccini work; Callas had her own Time cover (October 29, 1956) just prior to her New York debut. 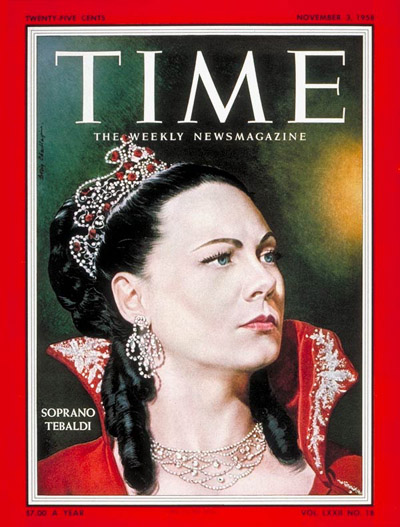 We have chosen Tebaldi’s rendition of Tosca’s famous aria. “Vissi d’arte (I lived for art)” offers a contemplative interlude amidst of the unremitting tension of Act II. Why, the distraught heroine asks, has God so unjustly rewarded her devotion and good works? Among the legendary interpreters of Tosca was Maria Jeritza. She owed her 1922 meteoric ascension to New York stardom to a stunning invention: she sang “Vissi d’arte” face down on the stage floor. In 1975 it was Magda Olivero’s turn. She tracked the arc of the music: first bent backwards over a divan, she stood and reached her full height as the climactic phrase attained its peak, then fell to her knees as she begged for Scarpia’s mercy (see our posts of September 9 and September 16, 2014). Still, most sopranos rely on minimal gesture and let Puccini do his work. This is Tebaldi’s way. She intones the broad swaths of the composer’s melody with the famously warm timbre that serves the fervor of Tosca’s prayer. The clip that follows is drawn from a 1959 U.S. television program.


Posted by Charles Affron, Mirella Jona Affron at 9:33 AM No comments:

Verismo (trans. Realism) was and remains the brand affixed to a style adopted by a generation of Italian composers of opera from 1890 to the first decades of the twentieth century. The movement was an outgrowth of late nineteenth-century French literary Realism and Naturalism and their expression in the fiction of the Sicilian Giovanni Verga, infused as it was with local color, the regional vernacular, and the quotidian of impoverished folk.


This long-standing brand, however handy, is widely acknowledged as problematic. True, its several attributes adhere easily to Pietro Mascagni’s Cavalleria rusticana (1890, see our posts of April 17, April 23, and May 2, 2015), the first and emblematic opera of the manner. Based on a Verga short story, the rural southern Italian characters and locale, the rapidity of action and violent denouement, carry the signs of the new style. But Cavalleria’s successors, with the exception of Pagliacci (1892), Ruggiero Leoncavallo’s short opera often paired with Mascagni’s one-acter, rarely subscribe to the plots and sites of Realism/Naturalism. In fact, veristic operas fit uncomfortably under a single narrative umbrella. Verismo applies fittingly to the plebeian mezzogiorno of Cavalleria and Pagliacci, but not at all well to the ancien régime of Puccini’s Manon Lescaut (1893), to the classist orientalism of his Madama Butterfly (1904), or to the contemporary European nobility of Umberto Giordano’s Fedora (1898).

Francesco Cilea’s Adriana Lecouvreur (1902) provides us another salient example. This title, too, strays far from the geographic, temporal, and socio-economic boundaries of Verismo’s foundational meaning. The opera’s libretto first situates the drama of the historical 18th-century tragedienne, Adrienne Lecouvreur, backstage at the Comédie Française. A sumptuous ballroom is the arena for the Act Three face-off between Adriana and the Principessa di Bouillon, her rival in love. As you will see and hear in this excerpt from a 2000 La Scala performance, the composer melds a neo-Classical ballet pastiche and his leading lady's spoken monologue from Racine's Phèdre with a contrasting orchestral comment and violent vocal interjections typical of Verismo. Adriana is Daniela Dessì; the Principessa is Olga Borodina.

A far less ambiguous label than Verismo is la giovane scuola (the young school), a contemporary term that defined the group of these post-Verdi Italian composers: Mascagni, Leoncavallo, Cilea,
Umberto Giordano, and most significantly, Puccini. They favored the short aria, the arioso. To the relief of singers and record companies, Verismo embraced excerptable pieces designed to invite applause and timed to the capacity of early records. The two-part structure of the bel canto aria, the slow cavatina capped by the fast cabaletta embellished with intricate fioritura and stratospheric high notes, and the grand statements of Verdi’s late period gave way to a shorter-breathed and shorter-ranged solo. Loris’s declaration of love in Act Two of Giordano’s Fedora, “Amor ti vieta” (Love forbids), lasts less than two minutes. The piece calls for a range under an octave and no agility at all. Mario Lanza’s way with this memorable melody turns the arioso into a showstopper.

The greater informality in musical structure advanced by la giovane scuola was joined to passages of colloquial, quasi-conversational exchange between and among characters. In the final minutes of Act Two of La Fanciulla del West, Puccini provides an unforgettable instance of just such rhetoric. In Gold-Rush California, Minnie plays poker for the life of her beloved Dick Johnson. Her opponent is the lustful sheriff Jack Rance. Puccini invests everyday vocabulary and brief utterances with the high drama of desperate love.

Here is a sample of the rapid-fire dialogue:

At the end of the act, Minnie, who has cheated at cards in a last-ditch effort to save Johnson, revels in her triumph.

Here is the poker scene from a November 1982 performance at Covent Garden. Carol Neblett, the recently deceased American soprano, is Minnie; Rance is the Italian baritone Silvano Carroli.

Posted by Charles Affron, Mirella Jona Affron at 8:17 AM 1 comment: