Note to those who receive new posts via e-mail: You must click on the title of the new post, highlighted above in blue, in order to access images and sound.


Giacomo Puccini’s posthumous Turandot (unfinished at the composer’s death in November 1924, with the final scene completed by Franco Alfano) was an event of national moment at its La Scala world premiere in April 1926. Prior to reaching the Met just seven months later, in November of that same year, it had been the subject of lively interest in the New York press. The then general manager, Giulio Gatti-Casazza, filled the stage with stars, comprimarios, choristers, dancers, and supers reported to number between six hundred and seven hundred. Joseph Urban’s spectacular orientalist design, a pinnacle of decor, was just one of his fifty or so Met commissions, an oeuvre still equaled.

Fifteen opening night curtain calls spoke eloquently of audience approbation. But most critics disagreed, some vehemently. The New York Times reviewer, Olin Downes, for one, embarked on the mission of striking the opera from the boards. He fulminated at every revival: “a whole resplendent operatic edifice, destined sooner or later to collapse like a house of cards, has been made of virtually nothing;” “Puccini had stopped creating when he wrote it, but had mastered the art of saying nothing exceedingly well; and in a final insult,” “there is only one work by a great composer of modern times that we think as bad, and that is the Egyptian Helen by Richard Strauss.” Downes and his colleagues notwithstanding, Turandot led the box office in 1926–27 and rang up receipts far above average the following season.

Following a run of twenty-seven performances between 1926 and 1930, Turandot was dropped, no doubt the victim of high production costs, hefty royalties, and the departure of the star soprano, Maria Jeritza, who had made the Chinese princess one of her signature roles. Here she is as Turandot, with Gatti-Casazza. 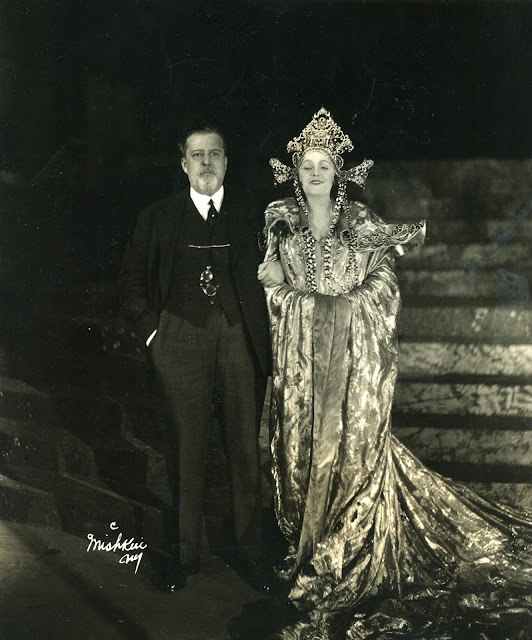 On the heels of the La Scala and Met premieres, Turandot made the rounds of the world’s great opera houses, and the tenor’s third act aria, “Nessun dorma (No one shall sleep)” quickly became an audience favorite. Calaf, the “Unknown Prince,” has bested Turandot in their riddle contest, but will renounce his prize, the princess herself, if she succeeds in discovering his name. At the climax of the aria, certain that he will prevail in their battle of wills, he exclaims “Vincerò.” Among the first to record “Nessun dorma” was Spanish tenor Antonio Cortis, moving in the dreamy opening section and thrilling in the concluding heroic outburst.


Turandot finally returned to the Met stage in 1961. The clarion voices of Birgit Nilsson and Franco Corelli would secure the opera’s place in the company’s canon for good. Here Corelli sings the Act I aria, “Non piangere Liù (Do not weep, Liù)” in a 1958 Italian television production. Calaf comforts the slave girl, Liù, who has accompanied his father into exile. Known for his stentorian top notes, Corelli exhibits the plangent tone and firm legato demanded by the piece.

The direction of the 1961 Turandot fell to Nathaniel Merrill. But the plaudits went to the delicate chinoiserie of Cecil Beaton’s long-ago Peking, with décor less grandiose than Puccini’s immense canvas had known in New York and elsewhere in the 1920s and 1930s. 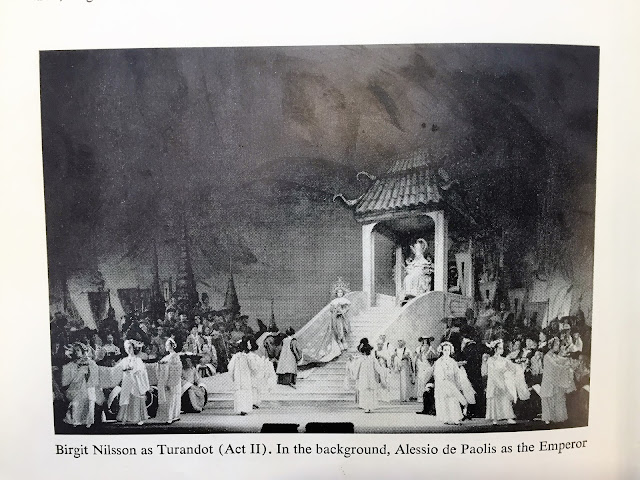 Met audiences will see again this season (the “Live in HD” simulcast is scheduled for January 30, 2016) the Franco Zeffirelli mise-en-scène which is by now three decades old. No surprise here. A year after assuming the mantle of general manager, Peter Gelb told an interviewer: “I promised the Met subscribers when I first came on board—well, I didn’t promise anything, but I did say that there were two iconic Zeffirelli productions, Bohème and Turandot, and that the other Zeffirelli productions are going to be replaced.” Gelb has held fast to his word. The lavish La Bohème and the massive Turandot live on.

It was back in 1987, and thanks to the philanthropy of Sybil Harrington, and to the particular fancy she took to Zeffirelli’s menageries, that general manager Joseph Volpe’s Met could take on the expense of the gigantic production. Harrington’s clout provided another opening for lamentations on the state of opera in New York. One critic groused that Zeffirelli’s La Bohème, Tosca, and Turandot, all underwritten by Harrington, had “turned the Metropolitan from house of art into tourist attraction, a nice conclusion, perhaps, to a bus tour including lunch at Mama Leone’s.” He may have been thinking of that moment during the Act 2 riddle scene when audiences gasped in amazement, and most reviewers in dismay, as the princess’s imperial backpack gushed multicolored streamers. Even without the soon-abolished streamers, Zeffirelli’s overstuffed palace stands in vivid contrast to Beaton’s elegant staircase, seen above. 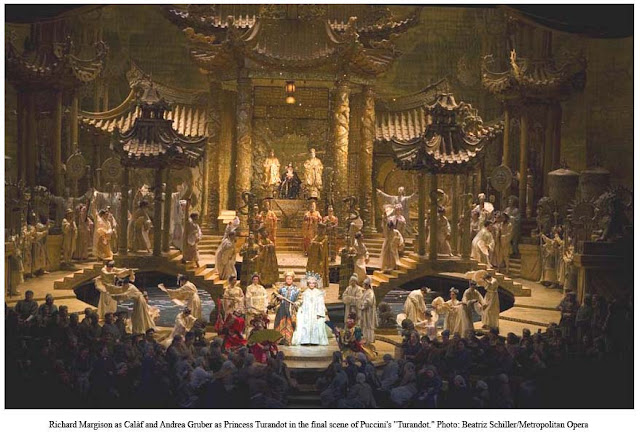 Turandot enters to sing one of the most taxing arias in the soprano repertoire. “In questa reggia (In this palace)” is a narrative about her ancestor, Princess Luo-ling, who was captured and murdered by the enemy. Turandot swears vengeance on any man who sues for her hand. She will put to him three riddles; if he fails to solve them he forfeits his life. Joan Sutherland, who performed heavier roles before becoming a bel canto coloratura soprano, is Turandot in this studio recording. She never sang the part onstage. Sutherland recounts the story compellingly and surmounts the exacting, high-lying phrases with ease and power.

Pucccini’s music ends just after the death of Liù, the slave girl who takes her own life rather than reveal the name of the Unknown Prince. In a lyric outpouring, she predicts that the ice princess, too, will fall in love with Calaf. Mafalda Favero, who appeared only twice at the Met in the late 1930s, expresses the grief and resolve which Puccini invested in the last aria he was able to pen.