To begin, a word about Roméo et Juliette’s long history at the Metropolitan. Charles Gounod’s opera was first produced in Italian during the company’s inaugural season, 1883-1884. It was not sung in French until opening night 1891, when French itself was at last heard at the Met. The currency of Roméo et Juliette, and the composer’s even more popular Faust, can be measured by the near monopoly these titles enjoyed as opening night fare during the “Gilded Age.” In fact, one or the other opened the season all but once between 1891 and 1900. A witty wag dubbed the Met the ”Faustspielhaus.” During the thirty-year period beginning in 1938 Roméo et Juliette was given in only two seasons. It reentered the core repertoire in 1967 and has been frequently revived ever since.

New this season, Bartlett Sher’s staging of Roméo et Juliette counts as one of the Metropolitan’s few successful recent productions. Those who were fortunate to be in the audience at the Lincoln Center house or at a “Live in HD” screening witnessed a performance faithful to the narrative as presented in the libretto, movingly sung and acted by the principals, Vittorio Grigolo and Diana Damrau, and beautifully conducted by Gianandrea Noseda. Michael Yeargen’s unit set, a nod to Elizabethan stage practice, favored the fluid unfolding of the action. It served the youthful exuberance of the doomed couple particularly well. 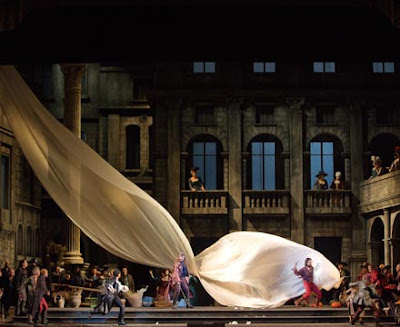 Shakespeare’s play (circa 1595) has been adapted to legitimate, musical, and dance stages endless times. At least eight operas (the most famous by Bellini, Zandonai, and Gounod) are based on the story of the “star-cross’d lovers.” We offer below three versions of the tragic scene in which Romeo and then Juliet take their own lives. We begin with Shakespeare’s text, continue with a ballet danced to Sergei Prokofiev’s score (1935), and conclude with Gounod’s final scene (1867).

The traditional staging, décor, and costumes of the 1976 telefilm starring Christopher Neame and Ann Hasson adhere faithfully to Shakespeare’s scenario and text. Preceded by Romeo’s duel with Paris, Juliet’s betrothed, then interrupted by Friar Laurence, whose herbal brew produced Juliet’s simulated death, and followed by a guard who alludes to the heavy toll Verona has paid for the feud between the Capulets and the Montagues, the final private minutes of the lovers are embedded in the social context of the narrative.

Kenneth Macmillan’s choreography (1965) was first performed by the world’s then most celebrated ballet team, Rudolf Nureyev and Margot Fonteyn, both extraordinary actors. The hyper-expressive physical conventions of ballet that so fittingly capture extreme emotions are unabashedly present when Romeo “dances” with Juliet whose inert body he mistakes for dead. Magically rendered by Fonteyn is Juliet’s evolving consciousness that it is Romeo who has died, and her evolving determination to take her own life.

The Met’s new production of Roméo et Juliette, to which we return, originated at the Salzburg Festival in 2008 where the principal roles were taken by Rolando Villazon and Nino Machaidze. The vocal crisis that would have such a devastating impact on Villazon’s career obliged the lowering of several of the role’s high notes. It did nothing however to inhibit the passionate energy and generous outpouring that marked him as one of the most exciting tenors of his generation. By allowing Roméo and Juliette an uninterrupted final duet in which they sing their short-lived joy at being reunited, then their despair as death overtakes them, Gounod allows the couple a privacy that excludes family and society. The only available clip, from Austrian television, has German subtitles.


Post-script: In 1947, the Met cast Roméo and Juliette with ideal interpreters, Jussi Björling and Bidu Sayão, but only twice. Fortunately, one of the performances was broadcast. We urge you to search for excerpts from this Saturday matinee on Youtube.

On February 11, 2017, the Metropolitan Opera will broadcast via radio its matinee of Carmen. Only Puccini’s La Bohème and Verdi’s Aïda surpass Carmen in number of Met performance, one thousand and counting.

Bizet is, together with Ruggero Leoncavallo and Pietro Mascagni, one of only three composers of multiple operas to have just one of his many titles boast a place in the standard repertory, and so prominant a place to boot. Pagliacci ranks ninth; Cavalleria rusticana tenth. Other of the composers’ operas, Bizet’s Les Pêcheurs de perles, for example, or Mascagni’s L’Amico Fritz, or Leoncavallo’s Zazà make it to the bills of international houses only sporadically.

Carmen was performed by the Met during the company’s first season, 1883-1884, in Italian, and then in German until 1891. It did not come into its own, however, until the management saw its way to the original French and brought together a cast--Emma Calvé, Jean de Reszke, Emma Eames, and Jean Lassalle—described by the Times as “near to justifying the epithet ‘ideal.’” Calvé set what still stands as the single-season record for a singer in a single major role, thirty-one performances. Abandoning all restraint, the exigent New York critic, Henry Krehbiel, called hers “the most sensational triumph ever achieved by any opera or singer.” We hesitate to include a clip of Calvé’s Carmen here; the poor quality of early recordings does not do her voice justice. You can find a number of her arias on Youtube.

Until the 1930s the Met’s star sopranos, Calvé, Geraldine Farrar, Maria Jeritza, and Rosa Ponselle in turn, claimed Carmen for themselves. Occasionally a mezzo-soprano would have a go at the part. The role’s range accommodates both higher and lower voice types. The darker or lighter timbre is each congenial in different ways to the character’s shifting moods. In the 1940s, a mezzo-soprano, Risë Stevens, tilted the balance to the deeper voice. Photographed in ads for Camels and Chesterfields brandishing Carmen’s signature cigarette, occasionally cast in the movies and frequently heard on the radio, Stevens was one of the most widely recognized classical artists of the period. Since she first took on the role (she sang it 124 times for the Met, second only to Calvé), Carmen has belonged nearly exclusively to the mezzo. 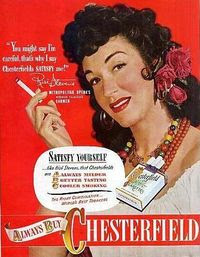 Here are clips of two of Carmen’s arias, the “Habanera” and the “Gypsy Song.” The “Habanera” is sung first by American soprano Leontyne Price. This excerpt is drawn from a complete recording of the opera, her sole assumption of the role. For purposes of contrast, Price is followed by Russian mezzo-soprano Elena Obraztsova in a live performance at the Vienna State Opera. Price binds the notes of the music’s coiling phrases in a hypnotic, silvery legato. Obraztsova conveys the character’s humor and appeal in the warmth of her sound.

French soprano Régine Crespin’s “Gypsy Song” comes from a complete recording of the opera. Again, for purposes of contrast, American mezzo Maria Ewing is here excerpted from a live performance from Glyndebourne. Crespin foregrounds the elegance of Bizet’s music with a voice both sumptuous and finely focused. For Ewing, the aria is not a showpiece, but rather a fierce expression of Carmen’s independent nature. In this emphatic public moment, the mezzo succeeds in inviting us into her private thoughts.

For eight seasons, beginning in 1914-1915, Geraldine Farrar sang sixty-five performances of Carmen, all but four of the company’s total in this period. Her charisma, beauty, and stagecraft led to a sustained Hollywood career, beginning with Cecil B. De Mille’s silent adaptation of Carmen. In her screen debut, Farrar exhibits the flashing dark eyes, the beguiling smile, the supple body, and the singularly uninhibited presence that defined her in the opera house. Alas, her movies predate the 1926 advent of the “talkies.” Here is a clip that weds the soprano’s image to her earlier recording of the “Gypsy Song.”